INTRODUCING THE YETI APP
Create a more dynamic & healthy you by a sophisticatedly designed regiment that works through re-mapping your body’s strength, symmetry and functionality first. Then obtaining aesthetics and mobility all while coaching a tranquil mindset...one might call this a rebirth.
Start today for only $1

WORKOUT WITH PROGRAMS THAT REAL CELEBRITIES HAVE USED AND BEGIN TO SEE REAL RESULTS.

PLUS, new workouts every week!

My app is one of the highest-rated on the App Store (and there’s a reason for that).

Ask me questions in the app

​Stream workouts to your TV 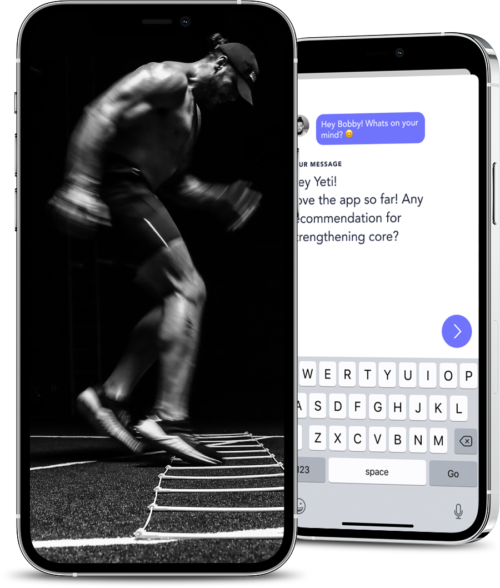 Bonus benefits, just for you

Hey there, I’m Joshua Bredl, also known as Yeti! I am a father of two & a former American professional wrestler best known for my time in WWE under the name YETI & Bronson THE NUKE Matthews. I have a background in college football, playing defensive end and defensive tackle for the ThunderWolves at Colorado State University–Pueblo and winning the national championship in 2014. I also played low post in basketball for the Colorado Hawks. in 2015, I tried out with the Denver Broncos and then signed as an undrafted free agent by the Green Bay Packers. In 2019, I helped opened the well known gym, Dogpound, in LA. Currently, I am a celebrity health and wellness coach, and have trained names such as Justin Bieber, Adam Levine, Kelly Rowland, Ricky Martin, Vanessa Hudgens, etc. In the beginning of 2021, I opened my own gym called NO CAP FITNESS. I am really excited to share my programs with you all and hope to train you in your fitness journey!

Start training with me today!