Quality training for all swimmers

What's inside the app 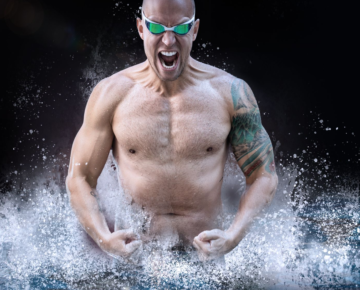 I'm Brent, and this is my story

Don't let the 4x Olympian title fool you. I failed swimming lessons...twice! If failure taught me anything, it was to understand that success was not given...it was earned.

In my journey, I went from a floundering summer club swimmer, to representing Canada at 3 Olympics, an Olympic Bronze Medal, a World Championship Title (plus 1 silver and 3 bronze), 33 National titles, 6 Canadian Records, and 2 World Records.

Unfortunately, depression took it's toll, and coupled with chronic back spasms, I retired from swimming immediately following my Olympic Bronze medal in 2012. I used to swim 9x every single week. Over the course of 7 years after I retired, I swam less than that in total.

Come to the summer of 2019, while my wife and I were visiting her home country Lebanon, we decided we wanted to film the Freestyle Mastery system that we had developed and had been teaching to swimmers in small clubs all over Canada. The results were so great and the system so simple, we wanted to make it available to swimmers all over the world. So we found a magical pool located on a mountainside which looked down the valley towards the Mediterranean, and we began filming. I say this was a magical pool, because something magical happened. I began to rediscover my relationship and love for the water again. And even though I had been out of the water for 7 years, it didn't feel like it at all.

And with only 1 year until the Tokyo Olympics, at the age of 35, I decided to come out of retirement and try to do something no other swimmer in history had done before. Qualify with less than a year of training. It only took 6 months. At my 2nd meet, I swam under the Olympic qualifying time in the 50m free. Then in Tokyo, leading off our 4x100m Freestyle relay, I led off in a time of 47.99 seconds, and at the age of 37, became the OLDEST SWIMMER IN HISTORY to break 48 seconds.