What’s inside the app 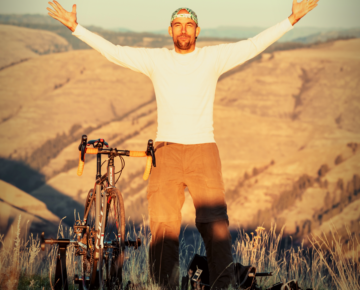 Years ago I found myself in my bathroom. Scattered below my feet was the hair I’d just shaved off my now-bald head. I looked into the mirror and couldn’t see the man looking back at me.

I had spent the previous 10 years racing triathlons and accumulating accolades along the way. I watched myself in the mirror, in awareness, as my brain was spinning out of control with the same thoughts. I was on a spiraling ride that I didn’t know how to get off of. There was no stop. No pause. The more things I tried to do, the worse the spinning became.

I first noticed it one day after work. I went for a run and for the first time in my life, I felt nothing. No emotions or feelings from physical activity. Just this sense that my body was… deadwood.

After years of racing, running, biking and swimming away from every problem I could ever imagine, my world had caught up to me. You can't outrun your demons - no matter how fast you are.

I didn’t know what I needed, but I knew that what I had been trying over and over wasn’t working. “Definition of insanity”, right?

I knew I needed something totally different than what I had been doing.

It was then that I discovered the power of meditation for my life and for performance gains, and my mind quieted.

I found cold water immersion when I purposefully jumped in Lake Michigan in winter - and the shock to the system helped reset me like a fuse box.

I removed all heart rate monitors from my body. I tracked nothing but what my body would tell me. I went inward. I went by feel. I rode my bike indoors in dark rooms for hours on end, simply listening. Listening to my body and my soul.

In that space, what I found was endless peace and inspiration. What I found was an ocean of answers and flow. I began to understand that being with my problems on the bike is far more powerful than trying to ride away from them. The world opened up to me from the inside. I was slowly climbing aboard the train to heal but I didn't know it yet.

Then I noticed something. The deeper I went internally, the healthier I became. Not only with my body but with my spirit. I returned to racing with a whole new mindset and physical prowess that I had never experienced before. So much so that I was able to be given a random bike, from a complete stranger, and with a seatpost that didn't work. And the next day, on a bike I’d never ridden before, I won the very competitive New York City Triathlon.

As my head hit the pillow that night at my friend's apartment, my mind swam with the realization that I had cracked into something special. A “secret” in plain sight.

What was that big secret? That entire year, in my quest for that internal healing, I had ridden less than 10 times outside. All of my riding was done indoors, in the dark, tracking no “data”, and with music chosen for its ability to move me at the soul level. Simply put, I was aiming at a healing Journey, and I found it. Unexpectedly, it also turned out to be a championship-winning strategy. It was something that no one was doing, and had created more impact inside and out than any traditional training ever had for me.

With something so profound, I realized that I had to bring this to the world. This was my Purpose here. Even if only a single person would benefit, it would be worth screaming it from the rooftops.

This is the origin story of Surreal Cycling. It started through pain. It spiraled into panic. It was reborn into flow. And through flow, serendipity became Purpose.

I know that Surreal Cycling is not for everyone. It is an exploration of your soul - and if you're not ready for it, this type of riding will repel you. And that is ok.

For those this message is meant for, it'll be your own sacred space for you to be able to heal and recharge. It's a chance to step back inside yourself and allow yourself the space and harmony to simply Flow.

These rides allow you to simply do one thing: Ride to Your Truth.

Welcome To Surreal Cycling. You’re going to love it!